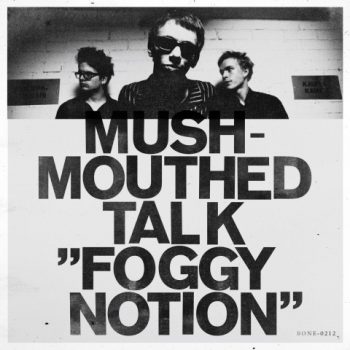 Noisy streetrock trio from Oulu, Finland, shooting sloppy hooks from the hip which you can sing a long even after having a crane of beer. Mushmouthed Talk are celebrating the simple, raw and the good in R’n’R

Mushmouthed Talk are three young men from the streets of Oulu. And with the help of some more men/women they’ve recorded a crunchy little album, sweet and rocking. Highly touch sensitive honey-overdrive with subtle nutty undertones.

Foggy Notion is their debut. The short album, 8 songs in 30 minutes, is full of youthful jaunty energy, played by young people, who seem to keep a link to their own puberty. It came as a breath of fresh air with the media in their homecountry (Rumba 5/5, Helsingin Sanomat 4/5, NRGM, a bit like Finland’s Pitchfork calls it one of the “debuts of the year”). Fuzzy and twangy guitars, Stooges- like hammering pianos, UHHS and Ahhs in loose background choirs, upbeat rhythms. And overall simple and catchy melodies, which could have been heard within the shabby walls of CBGBS in the late 70 as well. It’s a now-celebration of what has been proofed good in the past.

Recorded, Produced and mixed in Wolfbeat Studios in fall 2012 by Pentti Amore Mastered at Kick Out The Jams by Jürgen Hendlmeier