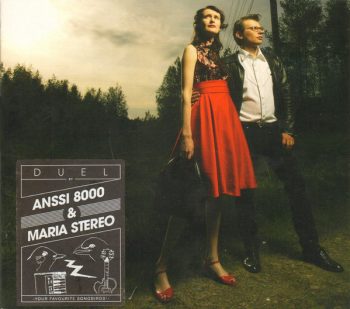 Married couple playing and singing rockmusic as a duo out of a wood cabin in the village of Sahalahti, Finland. Although they have a good beat going, what they come up with is far from being a soundtrack for the yearly midsummer village dance. Instead their debut consists of 12 turbo diamonds, all veritable underground hits, some DJ might like  to spin in his set somewhere between the White Stripes and B’-52s. Or vice versa.

Anssi has a distinctive voice, a semi-acoustic guitar and two drums (kicksnare and kickbass, both played with selfmade pedals). As one man orchestra he made a hell of a racket, that resembled rock’n’roll greats from Elvis to The Misfits and Nirvana, but sounded completely original and different. (Just check his debut “Kyklops vs. Svesse”, Bone Voyage DoubleCD) Maria his wife already put some cream on top on Kyklops vs. Svesse backing on some songs with  vocals, keyboards, maracas, cymbal and other things. But on the new album they found a new balance which boosts the couple’s music to new horizons with strong songs and heartfelt fresh vocals. Did I mentioned the 4-to-the-floor-cowbells?

Maybe the rural environment has something to do with the timeless qualities in their music. You don’t bother with the current hipster trends when you live in the woods. The duo writes basically simple and short rock tunes, but their sense of melody and dynamics are classic. Compared to the contemporary power rock sound or the alternately plaintive indie folk, Anssi and Maria are a breath of fresh air. They sound like actual human beings making music together. That’s it.